College Student in Hijab Allegedly Threatened to be Set on Fire 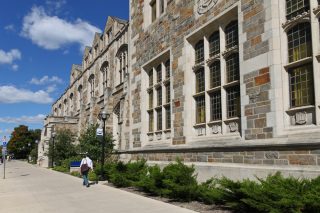 Police say a female Muslim student at University of Michigan was approached by a stranger who threatened to set her on fire. The suspect reportedly told the woman that he would do it if she didn’t remove her hijab. Authorities say that she took off the covering and left. The incident allegedly took place on Friday evening near the school’s campus in Ann Arbor.

Witnesses told police that the suspect appeared intoxicated and looked to be a white male in his 20s or 30s.

University public safety officials said in a statement that they’re “very concerned and disturbed” by the alleged incident, and that “[o]fficers are conducting additional patrols in that area and the Ann Arbor police are actively investigating. Diane Brown, public information officer for the school’s Division of Public Safety and Security, told The Washington Post that they “consider this a hate crime.”