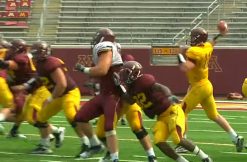 The University of Minnesota Football Team announced that they actually won’t boycott the Holiday Bowl game, admitting they couldn’t meet their original goal.

Teammates wanted officials to overturn the suspension of 10 players in connection to an alleged gang rape. That’s because no criminal charges were filed. However, their position changed a bit on Friday after a meeting with school president Eric W. Kaler, and Director of Athletics Mark Coyle.

“After many hours of discussion within our team, and after speaking with President Kaler, it became clear that our original request of having the 10 suspensions overturned was not going to happen,” the team said on Saturday. However, they said officials handed out some reassurances. “That all ten of these players have a fair hearing—which includes a diverse review panel. Number two, a showing of support for our team and the character shown by the great majority of our players. Finally, that we as a team will use our status as public figures to bring more exposure to the issue of sexual harassment and violence against women. We will have more details on our plans for that at a later time.”

A woman, unidentified in reports, said at least a dozen men raped her hours after the football team team’s season opener in September. No charges were filed, but she reached a settlement with five players: Ray Buford, Carlton Djam, KiAnte Hardin, Djor Johnson, and Tamarion Johnson. They had to stay away from her, and in exchange, neither side could sue. Each player is among the 10 currently suspended.

This story lands in a cultural fissure. An oft-cited 2010 study estimated that only 2 to 10 percent of outright allegations are provably false.

The stereotype that false rape allegations are a common occurrence, a widely held misconception in broad swaths of society, including among police officers, has very direct and concrete consequences. It contributes to the enormous problem of underreporting by victims of rape and sexual abuse. It is estimated that between 64% and 96% of victims do not report the crimes committed against them (Fisher et al., 2000; Perkins & Klaus, 1996), and a major reason for this is victims’ belief that his or her report will be met with suspicion or outright disbelief (Jordan, 2004)

In other words, investigators are way too skeptical, even dismissive, about these sorts of cases, causing significant harm to survivors. However, there has been some blowback against this line of thinking. Critics usually say that officials—especially disciplinary boards at universities—are too quick to find suspects culpable. Their argument: Due process is being violated at times.

On Saturday, the team insisted that it had respect for the woman who made the allegation.

“Our thoughts and prayers are for the well-being of the woman involved in the original incident, and for our 10 teammates to ensure that they are treated fairly,” they wrote.

You can read the statement below:

Here is the statement read by Gopher football team: pic.twitter.com/03GfmpzNQe