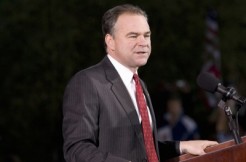 On Friday, presumptive Democratic presidential nominee Hillary Clinton announced she picked Virginia Senator Tim Kaine to be her running mate. Now she has to deal with some political liability. It has never been the biggest secret, but Kaine accepted expensive gifts when he was the state’s lieutenant governor and governor.

The total received between 2001 and 2009: over $160,000 according to records seen by Politico. This included over $5,500 in clothes, and a trip to a Final Four basketball game. A 2005 trip to a Caribbean island has been getting some press too. James B. Murray, a Virginia-area investor, brought Kaine to his Mustique vacation home. That has been valued at $18,000.

“I didn’t consider it a gift: There was no cash, I just let him use a house,” Murray told Politico. “There was no quid pro quo. I don’t have any business with him.”

It’s impossible that Clinton didn’t know about this before choosing Kaine for VP: The Washington Post wrote about this as early as June 22. Nothing illegal has been reported, though. Kaine and his people disclosed it all, and Virginia’s gift laws were pretty lax.

The optics on this remain problematic, however. Kaine’s successor as governor, Republican Bob McDonnell, lost his job in 2014 thanks to federal corruption charges. He was convicted that same year. Prosecutors said he accepted $177,000 in gifts and bribes to help out a businessman. The Supreme Court overturned the conviction in June. Chief Justice John Roberts said that prosecutors should’ve proved that the governor took a “formal exercise of governmental power” on a pending issue.
–