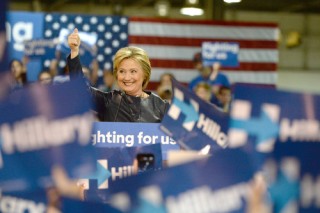 In May, Wall Streeters donated more than any other industry to Hillary Clinton’s campaign and pro-Clinton super PACs – nearly $4.45 million out of her total $314 million raised. Retired people and the printing & publishing industry took the Nos. 2 and 3 spots.

This news tracks with one of the major critiques of Clinton: that she’s been bought and paid for by Wall Street bankers. Clinton’s election, this storyline goes, could result in greater access for financial powerbrokers and a field day for the industry — and what’s good for Wall Street often is not good for Main Street.

The pattern is a repetition of what we’ve seen throughout Clinton’s campaign: The securities & investment industry (our term for what most think of as Wall Street), leads in overall donations to the Clinton effort, according to our numbers. Citing that same data, CNBC said recently that Clinton has had a “love affair” with Wall Street. Her rival for the Democratic presidential nomination, Sen. Bernie Sanders (D-Vt.), has accused Hillary Clinton of being “funded by Wall Street.”

One problem with the narrative, though: It ignores the fact that most of these contributions actually have come from a tiny group of ultra-wealthy, liberal donors who work in finance. Wall Street more broadly doesn’t have any outsized affection for Clinton, but a relative handful of donors who work in the industry have invested heavily in her.

Take May, for example. Of that $4.45 million given to the Clinton effort from securities & investment, $4.15 million – 93 percent – came from just five donors. That figure includes a $2 million donation from Donald Sussman, (No. 9 on our list of megadonors) and another $1 million from Bernard Schwartz (No. 28).

And since Clinton’s campaign began last year, 86 percent of the $39.5 million donated by the securities & investment industry to help her bid came from just 13 people.

These 13 gave $34.15 million. Each gave $250,000 or more in total to Priorities USA Action and other pro-Clinton super PACs, which — unlike her campaign — can take unlimited donations. The twelve include megadonors like George Soros and James Simons, who both have given $7 million and Donald Sussman, who has given $6.1 million.

Overall, 88 percent of securities & investment money contributed to the Clinton effort – $34.6 million –  went to Clinton outside spending groups, not her campaign. Only thirty-eight people account for all of that industry’s contributions to these super PACs.

The fact that there are fewer Wall Street donors than commonly thought doesn’t mean they won’t lobby Clinton for policy changes that benefit them. But if you buy Sanders’s assessment that someone donates to a candidate “in exchange for access and influence,” the data shows the entrée would be gained by these longtime liberal megadonors, and not the industry writ large.

It’s certainly possible these ultra-wealthy donors would lobby for policies that benefit the industry as a whole. But based on what they’ve said publicly, some of them advocate policy changes that would hurt not only other Wall Streeters, but their own bottom lines as well.

Simons supports closing the carried interest tax loophole, a significant benefit to many in the financial world, as do fellow megadonors Sussman and Soros. Soros has called for greater regulation of banks and financial institutions, and has also said he should pay more in taxes. Schwartz discussed why lack of regulation led to the 2008 recession in a Q&A with Democracy titled “I’m a Capitalist, But We Need a Regulatory Society.”  These four alone account for over half of the money contributed to the Clinton effort from the securities & investment industry.

So how fervently does Wall Street really support Clinton?

If Clinton was bought by investment bankers, hedge fund managers and the like, we’d expect to see them donating in large numbers to her campaign committee; even though individual contributions to that account are limited to $2,700 for the primary and another $2,700 for the general election, they are a good measure of which parts of the economy are really drawn to a candidate. But the securities and investment industry not only isn’t in Clinton’s top three industries, it’s down in seventh place.

For comparison, the same industry is also seventh in donations to the campaign of Clinton’s presumed opponent, Republican Donald Trump. Wall Street has given about $4.9 million to Clinton’s campaign, less than women’s issues interests.

Which industries donate the most to Clinton’s campaign?

Besides retired people, who have given the most at $26.8 million (and frequently lead candidates’ donor lists), the legal industry – lawyers and law firms – leads with $18.3 million, then education (mostly professors and other college employees) with $7.5 million, followed by real estate at $5.7 million.

Alec Goodwin work for opensecrets.org, a non-partisan nonprofit organization which tracks money in U.S. politics. They all contributed to this report.