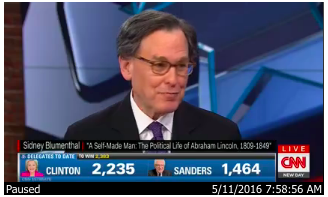 In an interview this morning to promote his new book, close Hillary Clinton friend Sid Blumenthal  told CNN’s Alisyn Camerota how the investigation into Clinton’s private email server will end. Blumenthal was confident that a “bombshell” would not be dropped, and that Clinton would not face any charges. In fact, he explained what exactly would happen instead.

“It is an inquiry into whether or not anyone intentionally put classified information where it shouldn’t be. My understanding is that they will conclude and the Department of Justice will issue a statement at the end that that was not the case. And all those who were involved in this kind of political hysteria will have to unravel it,” he said.

Things got a little uncomfortable when Camerota asked Blumenthal about whether he talked to Clinton about setting up a private server.

“Oh no … I had nothing to do with that,” he quickly replied. “I write Lincoln (referring to his new book about Lincoln), and I write Hillary and one of them has replied.”

Earlier this week, Blumenthal wouldn’t say whether he had been interviewed by the FBI.  Emails sent to Blumenthal were  intercepted by the hacker “Guccifer.” This incident is believed to be what first exposed Clinton’s use of a private email server. Camerota specifically asked if he would have advised her not to set up the email server.

“I have no idea. We are old friends, and when you are friends of somebody who is in the middle of politics, you get caught up in politics too,” he said.

An earlier version of this story had the wrong clip from CNN this morning. This updated version includes Blumenthal’s comments about the Clinton email investigation.