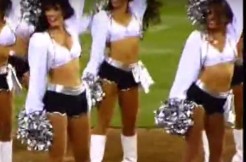 Cheerleaders have sacked the NFL with underpayment claims. No less than five lawsuits have been filed.

Last Friday, the New York Jets settled a class-action lawsuit for nearly $324,000. 52 women claimed the football team shortchanged them on wages during the 2012 and 2013 seasons. Some of the plaintiffs are still cheerleaders. Some, not.

Patricia V. Pierce, an attorney for one of the women, said they were paid $150 per game, according to a report by North Jersey. Besides their uniforms, they reportedly got no other compensation.

Mandated practices were allegedly unpaid. Plus, the cheerleaders had to shell out for their own makeup and transportation. And then there was the hair care. Yes, they allegedly had to pay for that, too. Jets cheerleaders, known as the Flight Crew, are required to flatten their hair.

“When you figure all that up, they were making less than minimum wage,” Pierce said.

In the settlement, the team said there wasn’t “any liability of wrongdoing whatsoever.” Nonetheless, Pierce said the team changed its cheerleader policy after the suit was filed in Aug. 2014.

Each cheerleader will get at least $2,559. More, if they’d worked both seasons, or took part in photo shoots for the Jets’ Flight Crew calendar. Whatever is leftover of the settlement will pay their lawyers and a claims administrator. The initial plaintiff, known in court documents as “Krystal C.,” will get a $5000 bonus, too.

The Jets aren’t the only football team to get accused of being stingy. The Tampa Bay Buccaneers, the Cincinnati Bengals, the Oakland Raiders, and the Buffalo Bills have all faced lawsuits from disgruntled cheerleaders, according to Fortune. For instance, Bills cheerleaders, “the Jills” have alleged sexual harassment on top of low pay, according to a report by SportsGrid.

There’s also the Raiders, who settled for $1.25 million in Sept. 2014 after several “Raiderettes” said they’d been paid less than $5 an hour. Still, a former Oakland cheerleader spoke against the claims when that suit was in its early stages. Check out the video:

But this isn’t just about the NFL. A Milwaukee Bucks cheerleader sued the team in September under the U.S. Fair Labor Standards Act as well as Wisconsin law. In the suit obtained by Fortune, she argues she wasn’t paid minimum wage, or even for overtime. Like the Jets cheerleaders, she alleges mandatory, but unpaid practice sessions, and having to pay out of pocket for required “appearance polices.” Salon visits, haircuts, tanning sessions, and the like. These visits weren’t for fun. This was a work-related payment, the suit states.

The law might be shifting in favor of the cheerleaders. For instance, the U.S. Labor Department cut short their investigation of the Raiders’ back in March, 2014. The feds’ explanation: The cheerleaders are seasonal employees, not covered by federal minimum-wage laws. Lawmakers responded. California passed a law mandating professional sports teams to pay cheerleaders at least minimum wages for not just games, but practices and appearances, too.

New York State is considering a similar bill as well, in response to the Bills suit. It’d give cheerleaders employee benefits. But if passed, it wouldn’t affect the Jets. That teams actually plays in New Jersey.