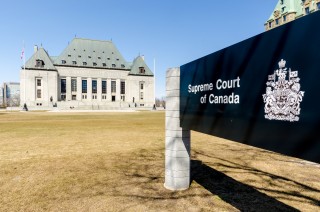 According to a surprise Canadian Supreme Court ruling, most bestiality is legal in Canada so long as it doesn’t involve penetration.  The decision stems from a case involving a British Columbian man who was convicted of 13 counts of sexual assaulting his stepdaughters including one of bestiality.  This man, known only as DLW, was acquitted of the bestiality charge based on this recent ruling.

In the 7-1 ruling, the highest court in Canada made the decision that bestiality required penetration.  According to the court records, DLW put peanut butter on the genitals of his victims and then had the family dog lick it off while he videotaped the act.  Court records also show that DLW tried to make the dog have sex with one of the stepdaughters, but the act ultimately failed.

“Although bestiality was often subsumed in terms such as sodomy or buggery, penetration was the essence – ‘the defining act’ – of the offence,” the court said according to the Independent.

“There is no hint in any of the parliamentary record that any substantive change to the elements of the offence of bestiality was intended,” the court continued according to the newspaper.

However, animal rights activists are not pleased with the decision of the court.

“As of today, Canadian law gives animal abusers license to use animals for their own sexual gratification. This is completely unacceptable, contrary to societal expectations, and cannot be allowed to continue.” said Camille Labchuk, executive director of Animal Justice Camille Labchuk, to The Independent in an emailed statement.

These animal rights activists have encouraged the Canadian Parliament to pass new legislation in order to clarify the meaning of bestiality.  In the meantime, bestiality without penetration remains legal in Canada.