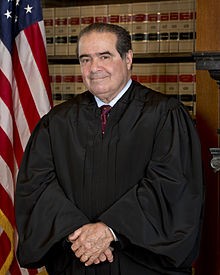 Chief Justice John G. Roberts, Jr., released this statement: “On behalf of the Court and retired Justices. I am saddened to report that our colleague Justice Antonin Scalia has passed away. He was an extraordinary individual and jurist, admired and treasured by his colleagues. His passing is a great loss to the Court and the country he so loyally served. We extend our deepest condolences to his wife Maureen and his family.”

Associate Justice Antonin Scalia was found dead of apparent natural causes at a resort in Texas on Saturday, according to The San Antonio Express-News.

Scalia was reportedly in Texas for a private hunting trip at the Cibolo Creek Ranch, a luxury resort in West Texas.  His body was found in his room by resort personnel after he failed to show up for breakfast on Saturday morning.

Scalia was appointed to the Court by President Reagan in 1986.  He was 79-years-old.