Updated: No New Evidence of Shooter at Naval Medical Center in San Diego 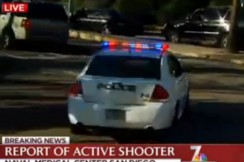 There may be an active shooter at the Naval Medical Center in San Diego, California, an NBC affiliate reports. The center posted a warning on its Facebook page at 8:08 am, Pacific Time.

**!ATTENTION!** An active shooter has just been been reported in building #26 at Naval Medical Center San Diego. All…

There are few available details right now. Stick with LawNewz.com for updates.

Updated — Jan. 26, 1:12 p.m. EST: Three gunshots were reportedly heard at the Naval Medical Center’s Building 26 at about 8:08 a.m. PST, but no injures were announced. No shooter has been identified at this time.

Updated— Jan. 26, 1:44 p.m. EST: In a press conference, Captain Kurt Jones, commander of Naval Base San Diego, and Captain Jose Acosta, commander of the Naval Medical Center, said that the only evidence of a shooter was the initial report: apparent gunshots heard at about 8:08 a.m. PST. Nothing else has been found after sweeping the area. Still, the area is still under lockdown just in case.
–