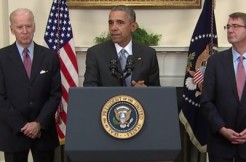 U.S. President Barack Obama held a press conference Tuesday on his plan to close the detention camp at Guantanamo Bay, Cuba. That place been infamous for reported human rights violations on suspected terrorists.

Obama says inmates can be held and tried without Gitmo. Instead, they can be put in American maximum security prisons, while also maintaining safety for the homeland, he promises.

Obama made closing Gitmo a huge priority in his 2008 campaign for the presidency, but hard plans haven’t really come through until now. After the conference, NBC’s Chuck Todd said the president has no political leverage to get this done.

[image of Obama via screengrab]
–