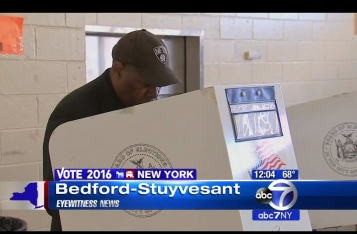 At a hearing on Tuesday in a lawsuit filed on behalf of hundreds of New York voters who say their voter party registration was changed without their consent, a federal judge did not grant the immediate relief the plaintiffs requested, however, she did allow the lawsuit to proceed and scheduled another hearing to take place at a later date.

According to TYT Network reporter Jordan Chariton, the judge ordered the plaintiffs’ lawyers to amend their lawsuit to name all 62 New York counties as defendants and provide them notice about who will  appear in court to defend the county’s voter registration process.

The New York Board of Elections denied any responsibility for any voter registration errors and said that is a county issue, according to Chariton’s reporting.

NY Board of Election said they have nothing to do with the problems, are “not responsible for the counties” #NYPrimary

Chariton also reports that the plaintiffs’ lawyers view today’s ruling as “good thing” because the lawsuit was not dismissed and therefore, they have an opening to challenge the election results.  The lawyers also reiterated their earlier calls for any voter who thinks they were wrongly removed from the Democratic Party voter rolls to vote on a provisional ballot in the primary contest on Tuesday.

Democratic presidential candidate Bernie Sanders has repeatedly spoken out against the New York closed primary system.  Many political analysts say Sanders is the candidate who was hurt most by the alleged voter registration problems in New York.