Because of Brock Turner, California Says No Probation for Sex Crimes 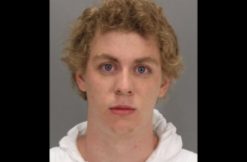 California Governor Jerry Brown recently signed a bill that’d eliminate probation for various sex crimes. Assemblymember Evan Low, one of the new law’s authors, said it was written because of the light sentence given to Brock Turner for sexual assaulting an unconscious woman behind a dumpster.

“I want to thank Governor Brown for his signing of AB 2888,” he wrote in a statement published Friday. “This sends the strongest possible message that rape is rape and in California, if you do the crime, you’re going to do the time. Judge Persky’s ruling was unjustifiable and morally wrong, however, under current state law it was within his discretion. While we can’t go back and change what happened, we have made sure it never happens again.”

Brock Turner was sentenced in June for the sexual assault. The specific crimes, all felonies: assault with intent to commit rape of an intoxicated or unconscious person; sexual penetration of an intoxicated person; and sexual penetration of an unconscious person. Judge Aaron Persky granted a six-month jail sentence and three-years of probation though prosecutors asked for an actual prison sentence. If you haven’t been following this story, just know that this sentence led to a whole lot of backlash. Critics called for the judge to resign, and defensive comments by Turner’s family only made things more intense.

Existing law prohibits a court from granting probation or suspending the execution or imposition of a sentence if a person is convicted of violating specified provisions of law, including rape by force, pandering, aggravated sexual assault of a child, and others.

This bill would prohibit a court from granting probation or suspending the execution or imposition of a sentence if a person is convicted of rape, sodomy, penetration with a foreign object, or oral copulation if the victim was either unconscious or incapable of giving consent due to intoxication.

Presumably a law like this would’ve leveraged Persky into actually giving Turner an actual prison sentence.