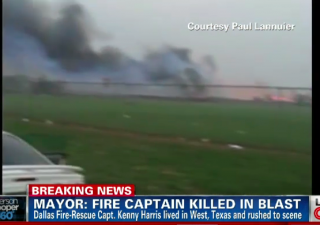 The fire that caused the explosion at the West, Texas fertilizer plant that killed 15 people in April 2013 was intentionally set, authorities said on Wednesday.

The Bureau of Alcohol, Tobacco and Firearms conducted more than 400 interviews during the course of its lengthy investigation and “ruled out all accidental and natural causes,” according to NBC News.

ATF Special Agent in Charge Robert Elder told reporters that investigators do not know why someone would have set the fire, nor would he comment on whether they had a suspect in mind.

The blast ripped through the town of West, Texas on April 17, 2013, just two days after the deadly Boston Marathon Bombings.  According to CNN, the explosion left a crater 100 feet wide and 10 feet deep.  Twelve of the 15 people killed in the blast were emergency first responders.  Another 200 people were wounded in the incident.

The ATF announced a $50,000 reward for information leading to arrest of the person or persons responsible for setting the fire.