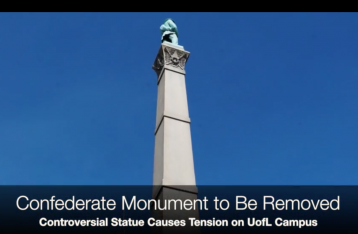 Jefferson County Circuit Judge Judith McDonald-Burkman issued an order on Monday to block a controversial plan to remove a 121-year-old monument erected in 1895 to honor Kentuckians that fought and died for the Confederacy.

“The stain of slavery and racism that this monument represents for many, many people has no place in a compassionate forward looking city,” Fischer said at press conference announcing the planned removal.

Despite some opposition, the removal appeared set to go forward as the area surrounding the massive 70-foot tall granite monument was fenced off for construction crews and equipment to begin work immediately.

“The fact of the matter is it’s wrong to erase history,” Corley told WHSH11 News.  “We are not living in Orwell’s 1984. We are living in the United States of America.”

Attorney Thomas McAdam told the Courier-Journal, that he is hopeful he can turn the temporary injunction into a permanent injunction that keeps the monument standing in the same place it has stood for more than a century.  McAdam explained that the central allegation of the lawsuit is the mayor’s removal plan violates the Kentucky Military Heritage Act, in addition to other local, state and federal preservation laws.  The lawsuit also alleges that the monument’s placement on the national register of historic places entitles it to special protections.

”We expect our elected officials to follow the law. The mayor has not followed the law,” McAdam told the newspaper. “All we want is a fair hearing, all we want is to let the people know that this is part of our heritage, and you can’t just erase history by tearing down monuments. That’s what the Taliban does, that’s what ISIS does. We don’t do that in America.

Jefferson County Attorney Mike O’Connell, whose office will argue against the permanent injunction, told WSAS11 he was surprised by Monday’s order and admitted that it caught him off guard.  However, he said the county will be prepared to fight against the order on Thursday.  O’Connell also took a shot at Mr. Corley, accusing him of orchestrating the lawsuit as a means of political grandstanding.  Corley is running for election to Congress as a Republican, according to the Courier-Journal.

For the time being, Judge McDonald-Burkman’s temporary injunction order bars anyone from “moving, disassembling or otherwise tampering with the 70-foot-tall monument.” A hearing is set on the plaintiffs’ motion for a permanent injunction on Thursday at 10:30 a.m.