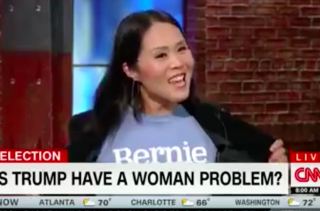 During a CNN New Day segment Friday morning which examined how Trump treats women, Elizabeth Beck, a Miami-based attorney, came on to discuss a contentious episode that happened when she requested a lunch break during a 2011 deposition with Donald Trump. She said she needed to excuse herself to breast pump.

Beck admits that, at first, Trump didn’t know why she needed to take a break.

This is not the first time Beck has gone public with her disdain for Donald Trump. In a previous interview, Beck said: “He got up, his face got red, he shook his finger at me and he screamed, ‘You’re disgusting, you’re disgusting,’ and he ran out of there.”

Tyana Alvarado, a former Apprentice contestant, also on the segment, had favorable things to say about Mr. Trump.

“I don’t feel that he is anti-woman. I think he is just a person that you have to earn his respect either man or woman,” Alvarado.

Trump has previously attacked attorney Beck for her statements:

.CNN & @CNNPolitics Lawyer Elizabeth Beck did a terrible job against me, she lost (I even got legal fees). I loved beating her,she was easy

According to CNN, Trump’s deposition stemmed from litigation over a failed real estate project. Beck’s clients claimed they lost tens of thousands of dollars when the project failed. Trump’s attorney, Allen Garten, confirmed that the incident happened but claimed that it was a stunt by Beck because she was having trouble during the deposition.

“She was attempting to breast feed — to pump in the middle of a deposition, in a deposition room with five lawyers and was not excusing herself,” he told CNN.

Beck, a Yale Law School graduate, is a founding partner at Beck & Lee in Miami, Florida.