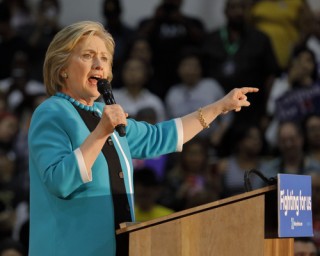 This morning, I wrote about how conservative pundits are failing to grasp the real issue with this State Department Inspector General’s Report probing Hillary Clinton (and other Secretaries of State) email usage. The ultimate findings of the report were that Clinton broke the rules because she didn’t turn over the emails from her private email server when she left office. Former Secretary of State Colin Powell is guilty of the same violation by the way.

The IG’s report is pretty clear about that: “At a minimum, Secretary Clinton should have surrendered all emails dealing with Department business before leaving government service, and because she did not do so, she did not comply with the Department’s policies that were implemented in accordance with the Federal Records Act.”

So here is where I have to call out Mrs. Clinton for today’s total spin job– and also the media for not asking her the right questions. Clinton was interviewed by several media outlets regarding the scathing audit. She said a variation of what she told MSNBC’s Chuck Todd Thursday afternoon:

“The report makes clear that personal email use was the practice under other Secretaries of State, and the rules  were not clarified until after I had left but I’ve said this many it was still a mistake if I could go back, I would do it differently”

So, first, Secretary of State Colin Powell was the only other SOS who used personal email (so this wasn’t really a common practice). As for her claim that the rules “weren’t clarified until after she left office” — that’s not completely accurate either. The rules that the OIG investigators found Clinton to have violated have been in place for quite some time — in fact for decades!

Every federal employee knows when they leave their post, they are required to turn over all documents that pertain to the federal record. It is no secret that Clinton did not do that. The Federal Records Act requires appropriate management, including preservation, of records containing adequate and proper documentation of the “organization, functions, policies, decisions, procedures, and essential transactions of the agency.” That’s been true since the law was passed in 1950!

Furthermore, “when someone leaves a federal position, the FRA requires that all such records be reviewed in conjunction with an agency records officer so that the agency (i.e., not the employee alone) can make decisions about which records will be preserved,” Dan Metcalfe, former Director of the Justice Department’s Office of Information and Privacy explained in a recent article. That’s also nothing new! So, at the very least, Clinton should have known that her emails which clearly discussed government business counted as a federal record. Therefore, they should have been turned over.

However, just in case she thought.. well, it’s an email so that doesn’t count as a “document.” She better think again,  because in 2009 (well before she left office), the Federal regulations were amended to say: “Agencies that allow employees to send and receive official electronic mail messages using a system not operated by the agency must ensure that Federal records sent or received on such systems are preserved in the appropriate agency record keeping system.”

Clinton is mincing words because, yes technically, the rules regarding personal email usage were further clarified after she left office with the passage of the Federal Records Act Amendments of 2014. However, even before then, if you ask me, they were pretty dang clear as it relates to the Federal Records Act.