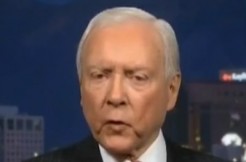 U.S. Supreme Court nominee Merrick Garland has been chatting with Republican Senators to shore up support for his confirmation, but he’s already been met with rejection from a once longtime supporter, Sen. Orrin Hatch (R-Utah).

“Like many of my Senate colleagues, I recently met with Chief Judge Merrick Garland, President Obama’s nominee to the Supreme Court,” Hatch wrote in a Deseret News editorial published Thursday morning. “I have known Judge Garland for many years and think highly of—”

The article was taken down soon after it went up, according to The Washington Post. But you can still read it here because everything on the internet lasts forever. Paul Edward, executive editor of the Deseret News, told the Post on Thursday that publishing it this early was a mistake. The article was an early draft “awaiting editors from the Senator following his meeting with Judge Garland.”

Oh..okay? Sure? It’ll be mighty interesting to see how this draft changes after their actual chat. A Hatch spokesman told the Post the meeting is still pending.

In the Thursday version, the Senator said the election season would taint the confirmation process.

“The reasons for considering a nominee after the political fireworks of a presidential election remain just as compelling today as they were in February following Justice Scalia’s death,” Hatch wrote. “In fact, the bitterness, pressure tactics, ad campaigns and political grandstanding since then have only confirmed that we made the right decision.”

Hatch claims he has nothing against Garland, saying he thinks “highly of his character and credentials.” But he’s still in an awkward situation here.

Note the Senator’s comments in 2010, when people floated Garland’s name as a possible replacement for retiring Justice John Paul Stevens.

But since Justice Antonin Scalia died in February, Hatch and other Republicans have said the Senate should wait for confirmation until after the November election.

LawNewz.com‘s requests for comment to the White House and Hatch’s spokespeople have not been returned.
–