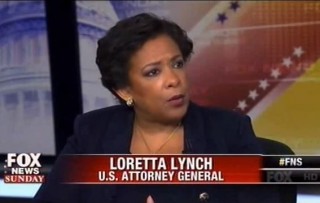 On Fox News Sunday, U.S. Attorney General Loretta Lynch spoke with Fox’s Chris Wallace, focusing much of the time on the aftermath of the Orlando terrorist attack and the continuation of the investigation. Continuing with the theme of radical Islamic terror, Wallace showed a clip of CIA Director John Brennan saying that ISIS is looking to carry out attacks in places other than the Middle East. Brennan said that it is probable that ISIS will use methods including “refugee flows” to get operatives into the west.

Wallace then asked Lynch if, based on that, is presumptive Republican Presidential nominee Donald Trump unreasonable to suggest temporarily banning refugees from entering the country to protect against terror.

Lynch completely dodged the questions, instead going back to talking about Orlando, and focusing on homegrown threats. This is relevant, since the suspected shooter, Omar Mateen, was not an immigrant, but born in New York and raised in Florida. However, Lynch did not address immigration at all in her response, and failed to weigh in on Trump’s proposal after hearing the CIA Director’s remarks.