A Hillary Clinton Indictment Could Create a Constitutional Crisis 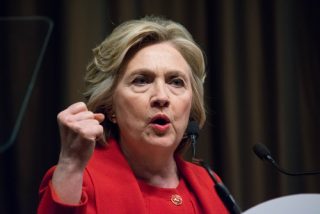 FBI Director James B. Comey’s letter to some members of Congress – which was certain to be leaked to the public – that his agency is investigating newly discovered emails which may (or may not) have some bearing on the earlier investigation of Hillary Clinton’s emails and email server, has triggered widespread speculation about its possible impact on Tuesday’s presidential election.

But beyond its impact, if any, on the election itself, it’s not too early to begin considering the impact – even if the possibility is seen by many as remote – if the former Secretary of State is indicted as a result.

It’s not too early because, if she is indicted, such an unprecedented situation could create a variety of confounding constitutional conundrums and other problems which legal scholars are only beginning to wrestle with, and for which we should prepared in so far as possible.  Indeed, it has the potential to create several different possible constitutional crises as serious as Watergate.

I say this as someone who lived through the various constitutional crises which Watergate created.  Indeed, I helped get the special prosecutors which led to President Nixon’s downfall appointed.

These appointments may have helped avert some of these unprecedented constitutional problems which can arise when the attorney general in overall charge of prosecuting Watergate wrongdoers is himself a criminal, and when a president suspected of being “a crook” (in Nixon’s words) is stonewalling and actively trying to obstruct the investigation.

To begin with, if Clinton is indicted – indeed, even before she is indicted – President Barack Obama could, while he is in office, pardon her for any and all federal crimes she may be committed.

There is clear precedent.  In September of 1974, President Gerald Ford gave Nixon a full and unconditional pardon for any crimes he may have committed against the U.S. while president.

His reasoning, which Obama may also find equally persuasive here, is that it was in the best interests of the country to be able to put the situation behind us.  Ford claimed it was “a tragedy in which we all have played a part. It could go on and on and on, or someone must write the end to it. I have concluded that only I can do that, and if I can, I must.”

A win by Donald Trump would create major legal risks for Clinton since it would greatly increase the chances of her indictment, and of her eventual conviction, because Trump has repeatedly announced that he has pre-judged her guilt, and believes she should be in jail (actually prison).  Indeed, his commitment to put her behind bars if elected has been made so frequently and so forcefully that Trump would be very reluctant to retreat from it even if he could.

Thus, anyone appointed as Trump’s Attorney General would probably have to share Trump’s views regarding Clinton and her alleged criminal acts.  Moreover, if he were unwilling to press the prosecution as hard as Trump wished, the AG serves at Trump’s pleasure, and can be fired for disobeying even a legally-dubious order to insure her conviction.

There is also clear precedent here.  In what is called the “Saturday Night Massacre,” President Nixon forced the resignations of Attorney General Elliot Richardson, and then newly-appointed Attorney General William Ruckelshaus, when they each refused to go along with Nixon’s attempt to scuttle a subpoena issued against him by a special prosecutor.

IF CLINTON WINS AND IS THEN INDICTED

If, however, Clinton is indicted after winning the election but before being inaugurated, she would not then automatically gain immunity from prosecution, but her lawyers could almost certainly stall the trial until after she became president.

During that period of time, it is also very unlikely that the lame-duck House would hold hearings and stage debates to try to impeach her (i.e., charge her with wrongdoing) since she could not be removed from an office (i.e. convict her of the impeachment) she didn’t yet hold.

IF THERE ARE FAITHLESS ELECTORS

But another real threat if she were indicted is that electors pledged to her might decide, in view of the drastically altered circumstances where Clinton has been indicted and may face a criminal trial while in office, not to cast their electoral votes for her.

These so-called “faithless electors” – members of the Electoral College who do not vote for the candidate whose election they stood for – have never changed the outcome of a presidential election, but there have been more than 150 such incidents in our history.

Although laws in about 30 states purport to insure that state’s electors will cast their electoral votes in accordance with the votes of a majority of the state’s citizen voters, these laws have never been enforced, and there is strong reason to believe they are unconstitutional.

For example, a federal judge recently held unconstitutional Virginia’s statute that provided criminal penalties for delegates to party conventions who do not follow the results of the presidential preference primary, saying that the statute “exceeds the powers retained by the Commonwealth of Virginia under the Constitution of the United States and cannot be enforced.”

In other words, Virginia (and perhaps other states) probably cannot punish Electoral College electors who may cast their electoral votes for a candidate other than Clinton.

So, if the Democratic Party persuades at least 270 Clinton electors to cast their votes for a substitute (e.g., Kaine, Biden, etc.) – because of the indictment, the serious blemish it creates for the party, and the threat of a criminal trial – there would be a Democratic president other than Clinton.

However, if only some but not all democratic electors declined to vote for Clinton, and as a result there was a deadlock or if no candidate received a majority, a “contingent election” is held.

The election of the President then goes to the House of Representatives, where each state delegation casts one vote for one of the top three contenders to determine a winner.  This has actually happened two or three times.

If Clinton is inaugurated and thereby becomes president, it would appear that she can legally pardon anyone, including herself, even before there is a trial or even an indictment.

While there are arguments that, although the president’s power to pardon for federal crimes is virtually unlimited, no person can be permitted to pardon herself, they seem weak.

Moreover, if Clinton were inaugurated and then did purport to issue a pardon to herself, it is doubtful that any potential plaintiff would be found to have legal standing to contest it in court.

This, of course, would not preclude Trump or others from claiming that the pardon is invalid, and possibly precipitating some type of crisis.

CLINTON ELECTED BUT NO PARDON

If Clinton becomes president and is subsequently indicted but does not issue herself a pardon, it is not clear if she can then be forced to undergo a trial.  Many scholars argue that a sitting president cannot be tried, although some disagree.

But the Supreme Court subsequently upheld the law which authorized the appointment of special prosecutors who might then have such power, even over presidential opposition.  The Supreme Court also held that President Bill Clinton did not have even temporal immunity from a civil law suit.

Moreover, precedent suggests that Clinton could not be impeached and removed as president based upon alleged criminal acts which occurred prior to the time she assumed office because, historically, alleged crimes committed before a president takes office were never considered impeachable offenses.

At least that was the conclusion of Congress dating back to the latter half of the 19th century. although the Constitution does not spell out any such requirement.

Or, as Gerald Ford famously said, “An impeachable offense is whatever a majority of the House of Representatives considers it to be at a given moment in history.”

But if a heavily Republican Congress – and it would take an overwhelming percentage since she could be removed only if two-thirds of the Senators agreed with House’s bill of impeachment – tried to remove her from office based upon pre-inauguration wrongdoing, and/or she refused to leave, there could be a constitutional crisis.

However, if they tried to convict her for allegedly committing new crimes such as obstructing an investigation or lying under oath about it, or if they simply tried to harass and/or otherwise embarrass her with numerous lengthy investigations, they would be on much firmer ground.

Needless to say, some of the scenarios above could easily blow up and create a constitutional crisis, especially since so many people apparently already believe that the election is already “rigged” – for Clinton and against Trump – and Trump has strongly hinted that he would fight anything which might purport to hand the presidency to Clinton.

Thus, with the election only a few days away, and an indictment at least possible (although perhaps unlikely) within weeks, it is certainly not too early for legal scholars and political tacticians to begin researching and analyzing the important constitutional and legal problems which might be created.

This election, arguably the most contentious and vicious in recent history, has the potential to give rise to more serious constitutional problems than anything since Watergate.

This is an opinion piece. The views reflected in this article are those of this author.

John F. Banzhaf III is a professor of public interest law at the George Washington University Law School who is best known for his legal cases against cigarette commercials and smoking, discrimination, environmental and public safety problems, etc.  However he also filed a legal action which helped lead to the appointments of the two different Watergate special prosecutors whose presence and efforts helped to avert several constitutional crises.