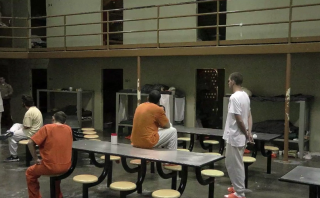 Indiana’s Clark County Jail had seven new inmates, but no one inside knew that they weren’t actually criminals. As part of A&E’s reality series ’60 Days In,’ civilians assumed fake identities and spent 60 days in jail, without the other inmates or jail staff knowing the truth. The show aimed to give participants and viewers an idea of what life is like for people in jail, and to give law enforcement officials a better idea of what goes on inside. The experience proved to be too much for two of the participants, who dropped out early.

LawNewz.com spoke with Clark County Sheriff Jamey Noel, who oversaw the whole operation. Noel said he learned a lot from the experiment, such as how some inmates were controlling who got to use the bathroom, and how homemade drugs were being made. One participant, Maryum Ali (daughter of boxing legend Muhammad Ali), is a social worker who suggested having a narcotics anonymous program in the jail, which has since been introduced.

Sheriff Noel was very happy with the program, but admitted he was relieved when it was over. “It’s tougher than you think to sneak people into jail,” he said. At least one participant had trouble keeping their cover story straight, and Noel said it was a challenge to keep an eye on the civilians without compromising their experience or the operation as a whole.

While Sheriff Noel was nervous about how the show would look on television, feedback has been positive. Viewers have told him they made their children watch the show as a deterrent to keep them from getting into trouble. According to A&E, ’60 Days In’ is the network’s number one show, and it’s the top unscripted show on cable among key demographics.

“It was a great learning experience,” Sheriff Noel said. “I would definitely do it again.”

The season finale of ’60 Days In’ airs on Thursday at 10pm, and viewers will see the undercover inmates returning to their families and civilian lives. Next week, the participants will reunite for the first time in a special hosted by LawNewz.com founder Dan Abrams, where they will look back on their experiences.