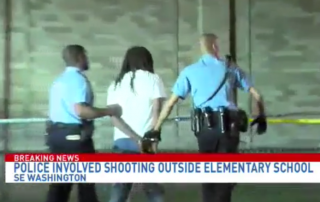 Three women and two men were arrested early on Tuesday, after they allegedly fired at police officers who were investigating reports of shots fired, according to Fox News. When they arrived at the scene near an elementary school in southeast Washington, D.C. just after midnight, individuals reportedly opened fire from inside an SUV.

Police spokesman Dustin Sternbeck told Fox News that officers fired back and ordered the shooters out of the car, but they refused. After approximately 30 minutes, five people exited the SUV and gave themselves up to officers. Their identities have not been made public yet.

No injuries were reported. Police said the shooting was not a “planned attack on police,” but was meant to avoid arrest, according to Washington Post reporter Peter Hermann.

Police engage in shootout with armed subjects in SE DC. No injuries. Police say was “not planned attack on police” but to avoid arrest.