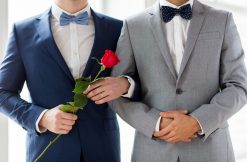 Former Missouri State University student Andrew Cash says he was just a few credits shy of getting a counseling degree from the school. But he said they kicked him out because he refused to work with same-sex couples. Now he’s won $25,000 in a settlement, according to a report from Courthouse News.

This might sound familiar to the case of Kim Davis, the county clerk in Kentucky who refused to issue marriage certificates to same-sex couples because of her religious beliefs. An appeals court dismissed her lawsuit against the state in April. In cases like this, the parties involved tend to wrangle over the First Amendment, and how it relates to government figures who disagree with the laws they’re supposed to implement.

When it comes to Cash’s situation, he’s a student who sued under federal and state law.

“This civil rights action raises federal questions under the United States Constitution, particularly the First and Fourteenth Amendments, and the Civil Rights Act of 1871, 42 U.S.C. § 1983,” said his lawsuit, filed in April in a Missouri federal court.

According to the complaint, in 2011, the Executive Director of the Springfield Marriage and Family Institution—where Cash was interning for course credit—said he would only counsel same-sex couples separately, but not together because of his religious beliefs. The next day, a school official told Cash he could no longer intern at SMFI until “ethical concerns” has been addressed. They had a meeting, where the official asked if he would work with same-sex couples.

“Plaintiff said that he would counsel them individually on issues related to depression, anxiety, etc., but not as a couple, but that he would refer them elsewhere,” the lawsuit states.

The school allegedly kicked him out of the master’s degree program after some initial push and pull over the matter.

As part of the settlement, the school admits no liability. In return, Cash reported can’t go back to school with MSU or try to work there. We reached out to the university for comment.

“We are honored to have represented Andrew Cash in his quest to serve others with professional counseling, while maintaining his religious convictions,” Cash’s attorney Thomas Olp told LawNewz.com in a statement. He’s with Thomas More Society, a conservative law firm known for supporting anti-abortion cases. “His religious convictions are protected by the U.S. Constitution and should have been respected in an academic environment. The good news is that we helped Andrew Cash move on with his life to pursue a degree at a university that respects his rights of conscience.”

In a statement to LawNewz.com, MSU confirmed the settlement amount, which will be paid by the State of Missouri’s legal defense fund. They also confirmed the fact that they don’t admit wrongdoing by agreeing to pay Cash.

“This amount covers the estimated tuition to obtain a master’s degree in counseling from Evangel University or another similar institution,” the statement reads. “In settling the claim the university does not admit to liability. This is viewed as a compromise to avoid the time, trouble, and expense of litigating the disputed claims.”

Update – Jan. 16, 5:56 p.m. EST: We added a statement from Cash’s lawyer, as you can see above. An earlier version of this article didn’t mention that we reached out to the school for comment.

[image via Syda Productions and Shutterstock]