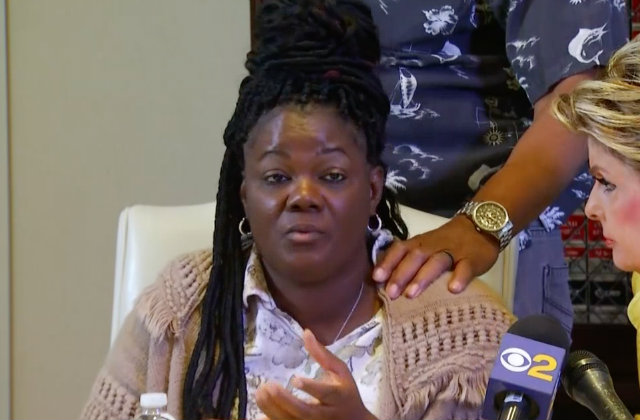 A California woman says Walmart has been locking up black women’s hair products behind glass while items aimed at other races received no such treatment. Essie Grundy, backed by attorney Gloria Allred, announced her lawsuit on Friday.

“I would like the glass to go down, and for things to go back to the way it was, where it’s not segregated and everything is where everyone can get what they need,” she said in a press conference covered by NBC Los Angeles.

Grundy, who is African-American, wanted to buy a lotion brand for her children at a location in the city of Perris, she said, but discovered it was set behind glass, as were other beauty products aimed at black women. She couldn’t even touch the product until after an employee walked it to the register.  Gundy said she returned to the same location later to buy a 48 cent comb, and discovered that that too was set behind glass.

Allred said they’re looking for an apology from Walmart, and a court injunction to stop the practice.

“We’re sensitive to this situation and also understand, like other retailers, that some products such as electronics, automotive, cosmetics and other personal care products are subject to additional security,” a Walmart spokesman said in a statement obtained by NBC. “Those determinations are made on a store-by-store basis using data supporting the need for the heightened measures. While we’ve yet to review a complaint, we take this situation seriously and look forward to addressing it with the court.”