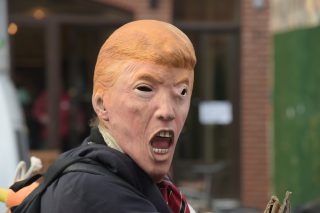 As if this election season hasn’t been bizarre enough already, police in south Florida said that an unidentified man attacked a woman while wearing a Donald Trump mask late Sunday night.

The woman suffered minor injuries after what officers first described as an “aggravated battery/stabbing,” according to WPTV. As of Monday morning, it was unclear if anyone had actually been stabbed, but the woman had a knife when Cape Coral Police arrived on the scene, officers said.

The alleged attacker, who was only identified as being a white man dressed in black (and the Trump mask, of course), reportedly fled on foot before authorities showed up.

[Image via a katz/Shutterstock, this was not the mask used in the alleged attack]