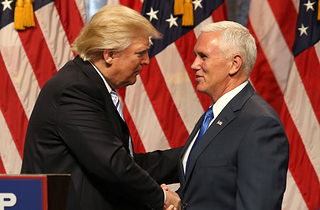 Vincent Caldara, a retired police officer who holds the volunteer role of chairing Donald Trump’s Florida law enforcement supporters, has been fired from his day job as a pilot for Eastern Air Lines, which provides private planes to Trump running mate Mike Pence. The reason? According to The Guardian, it stemmed from their earlier report, published last Sunday, that Caldara had been charged last year with repeatedly ramming a man with his car. He’s also alleged to have clipped a woman while driving recklessly on his motorcycle in June 2014, which the victim is suing him over.

Eastern told The Guardian on Sunday that “Mr Caldara is no longer employed by Eastern Air Lines” in a statement, making sure to “wish him well in his future endeavors” and stress that ” Eastern has no further comment on this to respect everyone’s privacy.” Marc Lotter, Pence’s press secretary, added that “Mr Caldara is not a paid employee of the Trump campaign nationally or in the state of Florida.”

Lotter and other campaign representatives “repeatedly declined” to clarify if Caldara still has his volunteer role. However, numerous references to him have been expurgated from the Facebook page for Trump’s Florida campaign. On Monday, the day after the publication of the initial Guardian story, Caldara was at Trump’s side at a campaign event in Fort Myers, Florida.

Jeff Shanley, a former “business associate” of Caldara, has required two different surgeries for injuries stemming from the alleged motor vehicle attack. The installation of a spinal stimulator, which controls pain, was one, with fusion of his right hand being the other.