Video Shows Spring Breaker Throwing Football at Police Car, Cops Toss Back Video of Their Own 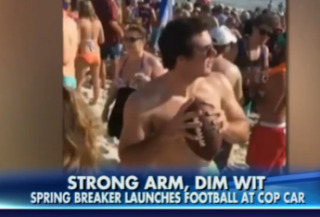 A spring breaker enjoying the beach probably didn’t expect this when he showed off for his friends. Kameron Heady was partying in the sun in Gulf Shores, Alabama, when he launched a football over a crowd of people towards a police vehicle. The beautiful throw landed on target, but it landed Heady in hot water. A video of the pass ended up on social media, Gulf Shores police found it, and traced it to Heady.

Their response was perfect, issuing a video of their own, saying “Great arm. Bad decision.” It also informed Heady that there is a warrant out for his arrest, and that he can turn himself in at the Gulf Shores Police Department. Heady is back home in Texas, and Gulf Shores officials are trying to negotiate with his attorney. “The longer he delays, the more aggravated we’ll get,” Police Chief Edward Delmore told Fox News on Monday.

In previous years, Gulf Shores hasn’t had a lot of students on spring break, but Delmore said this year there were about a thousand young people “binge drinking, using drugs, using profanity, and really trashing our beach.” The police went out to handle the situation, and that’s when Heady threw the long bomb. Delmore said someone called his department and identified Heady, and that’s when they made their video. “We wanted to send a message,” Delmore said. “To give the devil his due, he does have a good arm.”