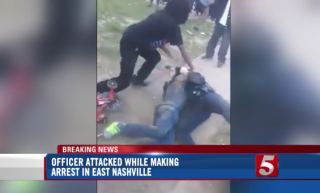 Cell phone video shows a Nashville police officer being kicked and dragged while trying to make an arrest earlier this week. Officer Matthew Cammarn, who was the 2015 Nashville Police Office of the Year, was responding to a call about shots fired, according to News Channel 5.  When he arrived at the scene, he reported witnessing a suspect assaulting a female. He attempted to wrestle the man to the ground when he was attacked by others in the group who were watching.

The officer was taken to the hospital, but has since been released. The night before this incident, another officer was apparently stabbed while trying to break up a fight in the same area.

This is a tweet from when Officer Cammarn was named Office of the Year for saving a teenage girl:

Officer Cammarn was the MNPD’s 2015 Officer of the Year for saving the life of a 17 yr old gunshot victim. pic.twitter.com/I3gHE8eTAW

[h/t and screengrab via News Channel 5]