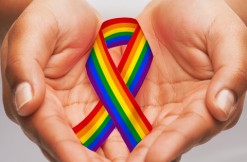 Police in Maryland arrested a juvenile on Thursday for allegedly threatening to shoot up gay rights supporters at his school. Authorities didn’t identity the student to the Capital Gazette, citing his age.

The Gay-Straight Alliance at Severna Park High School was handling out rainbow ribbons to commemorate Friday’s “Day of Silence.” That’s an annual, national event that calls attention to anti-LGBT bullying among students. The juvenile made the alleged threat against people who wore the ribbons on Monday. In a letter to parents obtained by the Capital Gazette, Principal Patrick Bathras said the comments were “inappropriate” and “disparaging,” but “implied no credible threat.”

“Just the fact that he [the juvenile] thinks it’s okay to say it in the first place is appalling,” 17-year-old Moira Cameron told the Capital Gazette. She’s the president of the school’s GSA. “It’s not going to stop us.”