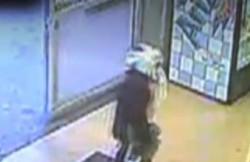 Statistically speaking, it’s bound to happen now and again. An 8-year-old boy is accused of attempted robbery in West Palm Beach, Florida. (Full and honest disclosure: We are not looking for Florida stories on purpose. They just happen, we swear.)

A witness, this clerk who wished to remain unidentified, told WFLA the child just walked into his grocery store “very quietly, very confidently.” The tiny (and he is short) kid reportedly wore a motorcycle helmet, and had a sweater over his mouth. You can see video of the attempted robbery here:

The kid allegedly knew some bad words as well. “’Give me the f-ing money,’” the clerk said, quoting the child’s alleged demands. But the clerk reportedly tore the gun from the 8-year-old, and store employees grabbed him.

The boy was placed in custody, and sent the hospital, but no injuries were reported.

The clerk told WFLA he didn’t know if the gun was fake or not at the time. Apparently it was real! Authorities say the kid stole the gun from his mother.

The investigation is ongoing, and no charges have been announced.