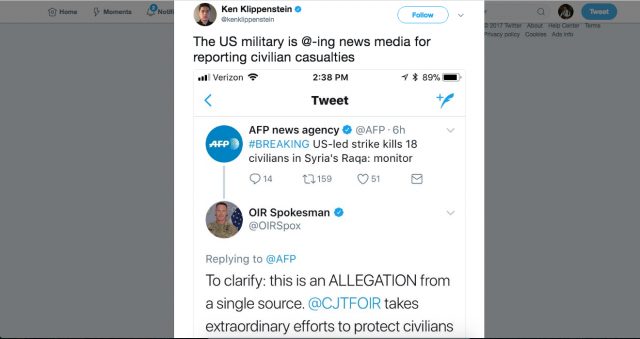 Earlier today, the U.S. military took the time out to respond to a tweeted press report about civilian casualties allegedly caused by U.S. bombings in Syria today.

As one might imagine, if an official U.S. military press officer feels the need to tweet back at someone, they’re probably a little upset.

And upset they certainly were.

The US military is @-ing news media for reporting civilian casualties pic.twitter.com/uKTpD982dx

To clarify: this is an ALLEGATION from a single source. @CJTFOIR takes extraordinary efforts to protect civilians & strike valid mil targets

The original AFP tweet did not include a link to the actual reporting, as the story itself was breaking. About an hour later, the AFP replied back to its original tweet and included a link to the story. The full AFP story attributed the casualty-counting to the Syrian Observatory for Human Rights (“SOHR”), but did not incorporate Dillon’s objection.

SOHR is a United Kingdom-based organization which has been vociferously criticized for their lack of neutrality and bias against the Syrian Ba’ath regime. Their record on body counts, however, has been determined to be fairly accurate by the United Nations and Amnesty International.

The AFP story goes on to note that the U.S.-led bombings targeted water wells and killed at least 18 civilians, including four children.