Two Officers Shot in San Diego, One Expected to Survive 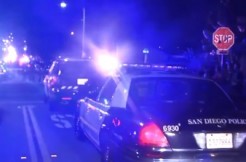 Two police officers were shot Thursday night during a traffic stop in San Diego, California. One passed away while the other is expected to survive.

Details remain sketchy for now. Police Chief Shelley Zimmerman said that one suspect is in custody, NBC San Diego reports. The man, a Hispanic male, was also shot, and is in custody at a hospital.

BREAKING: We have one suspect in custody. We are still searching the area for other possible suspects.

It is with a very sad heart that we announce the death of one of our Officers tonight. Pray for his family pic.twitter.com/3l9PXa1vuW

BREAKING: We still have a second Officer in surgery. Keep him in your prayers.

.@ChiefZimmerman just left the hospital where our second Officer has just come out of surgery. He is expected to survive!!

Zimmerman stated that the officers reportedly called in the shooting shortly after they responded to a routine traffic stop. When asked if this was an ambush, she said the investigation is ongoing: “We don’t have enough information at this point.”

Chief Zimmerman announced the arrest of the suspect.

She also released the names of the two officers involved.

MEDIA BRIEFING: "Our hearts go out to the wife and two kids of fallen Officer Jonathan DeGuzman" – @ChiefZimmerman pic.twitter.com/l2Na4X4Cow