Teenage ‘Dr. Love’ Arrested for Posing as a Doctor, Ran His Own Clinic 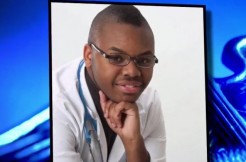 He calls himself “Doctor Love.” Malachi Love-Robinson, an 18-year-old, was arrested Tuesday in West Palm Beach, Florida for practicing medicine without a license. He was even was running his own clinic.

So I guess if you wanted health advice from a modern-day Doogie Houser, you’d check out his New Birth, New Life Alternative Medicine and Urgent Care Clinic. There’s even a Facebook page, but that seems to have been taken down. I wonder why.

With a hearing scheduled for Wednesday, he faces a third-degree felony charge, but police think he might have also stolen a patient’s checks from her purse. This investigation is ongoing.

“Doctor Love” has been in trouble before for the same thing. In January, 2015, the then-17-year-old walked into a pregnant woman’s exam room at St. Mary’s Medical Center, wearing a stethoscope and face mask, according to a police report obtained by WPBF. Doctors and staff had reportedly seen him creeping around the halls and entering patient’s rooms for a month.

“No, ma’am, I requested to shadow physicians,” he told WPBF about that incident. “Next thing I know, cops are there, that’s all I know, all I know. I have no idea.”

Of course, “Doctor Love” was also issued as cease-and-desist order in October by The Florida Department of Health, which said he was practicing massage therapy without a license.

Doctor LoveGMApracticing medicine without a license