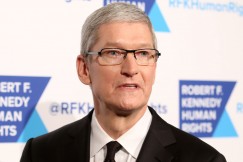 If you own an iPhone, you’re going to want to read this. And if you don’t, then you probably still should. Apple’s CEO Tim Cook announced Wednesday that his company won’t help the FBI build a version of the iPhone that’s easier to hack. This is in response to the feds’ investigation of the San Bernardino mass shooting, which happened in December. They’d discovered the phone of shooter Syed Farook, and want Apple’s help breaking into it since they don’t have the password.

“Specifically, the FBI wants us to make a new version of the iPhone operating system, circumventing several important security features, and install it on an iPhone recovered during the investigation,” Cook wrote in a statement. But this was too much for the company, which insists they’ve been helpful in the investigation up to this point.

Cook wrote that he fears this technology could fall into the wrong hands, and could be used to hack into the iPhones of innocent people. “The government suggests this tool could only be used once, on one phone,” he wrote. “But that’s simply not true. Once created, the technique could be used over and over again, on any number of devices.”

The FBI wants to use the All Writs Act of 1789 to give them the legal backing for this, according to Cook.

Farook, 28, and his wife Tashfeen Malik, 29, killed 14 and injured 22 people on December 2 at a government building in San Bernardino, California. Though the couple made statements of support to ISIS, it doesn’t seem like the FBI has confirmed hard links between them and that terrorist organization.

[image of Tim Cook via Shutterstock]
–