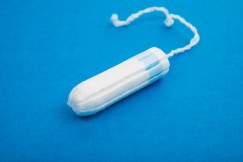 Five New York women seeking to abolish the Empire State’s tax on tampons and sanitary pads have taken their fight to the courts.

The lawsuit states that pads and tampons are not considered medical items under state law. State guidelines instead categorize feminine hygiene products as “general merchandise.” In other words, the products are not eligible for the “medical supplies” tax exemption.

The complaint does not mince words:

There can be only one explanation for the Department’s decision to tax tampons and pads but not Rogaine, dandruff shampoo, foot powder, chapstick, and so many other less medically necessary products also used by men…[these products] are used by women only.

The battle over the “tampon tax” seeks to combat the misconception that feminine hygiene products do not serve medical purposes when in fact they are a necessity for women’s health. Without access to tampons, women may resort to unsanitary pads which can lead to “infections and an increased risk of diseases such as cervical cancer.”

The lawsuit further claims that the tax violates the Equal Protection Clauses of the United States Constitution and the New York Constitution, respectively. In light of an estimate that projects New York women pay $14 million in taxes on feminine hygiene products each year, the women are seeking “restitution and damages in an amount to be determined at trial.”