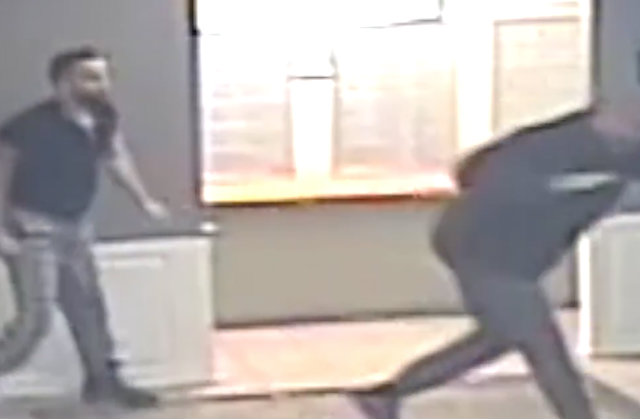 Ronald Griffin said he became blind in one eye for defending his gay stepson from a homophobic superintendent, according to The New York Daily News. Now they’re suing because the attacker kept his job despite pleading guilty. Stepson Joey Brown filed in Bronx Supreme Court.

In his suit, he claimed that his building’s super, Jose Adorno, had been harassing him since August 2016.

“He’s a racist, ignorant – don’t care about anybody but himself,” Brown told The Daily News. “He’s always gay-bashing people.”

This culminated in a brawl at their Bronx apartment building’s lobby, caught on surveillance tape at about 2:10 a.m. Saturday. Brown and Griffin got into an argument with Adorno. Griffin said he suggested that Adorno might be secretly gay himself.

“On the down low you probably want my son to f–k you,” Griffin said, recalling what he told Adorno.

The super lashed out, the plaintiffs said, stabbing Griffin and rendering him blind in one eye.

Adorno ended up pleading guilty to third-degree assault. He served 60 days, and according to Griffin, fulfilled an order of protection. But he still works in the building, although he sends other people if work needs to be done in their apartment.

The plaintiffs also sued the management company and landlord, who are accused of letting Adorno continue working in spite of previous complaints.

“This particular super had a history of harassing the LGBT tenants of this building. And they did nothing,” said Brown and Griffin’s lawyer Mark Shirian.

[Screengrab of Adorno, left, and Griffin via NY Daily News]