Successful Surgery for Dog ‘Who Took the Bullet’ for Officer 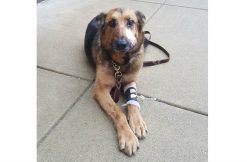 A police dog shot by a suspect in Gary, Indiana is going to be okay. The Lake County K9 Association announced on Saturday that Blade is leaving the hospital after getting surgery to his jaw and neck.

Indiana State Police said that a traffic stop turned violent on Wednesday. That’s when an officer for the Lakeview Sheriff’s Department pulled over a silver 2007 Toyota Avalon, but the passenger and driver started running.

The officer and Blade trailed the passenger, identified as 18-year-old Marquis Thomas into an alley. The suspect opened fire, hitting Blade in the face.

“He grabbed the weapon and he saved the officer’s life,” Lake County Sheriff John Buncich told WLS. “There’s no doubt about it. He took the bullet for the officer.”

That officer fired back, striking Thomas, who succumbed to injuries on Thursday.

“His working days are probably over, but he will always serve as my protector,” the officer, Chris Vukin, wrote in a statement on the K9 Association’s Facebook page. “Thank you everyone for standing by us.”

State police, who is investigating at the sheriff’s department request, said the driver “has been located and has made a statement and is not considered a threat to this case.”

This case is ongoing.