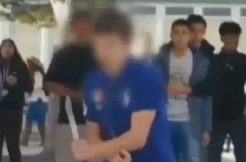 As seen on video, a 14-year-old boy with a pair of knifes menaced other students at Hug High School, and a police officer shot him.

It happened Wednesday in Reno, Nevada. RPD Chief Jason Soto told reporters that it started with a fight between two students, and one of them pulled out the blades. He said the officer gave verbal commands to drop the weapons, but the boy didn’t comply.

You can see cell phone footage below, via KTVN. WATCH:

The student is being treated at the Renown Regional Medical Center. No other injuries were reported.

The cop, who works for the Washoe County School District, is on administrative leave per policy, but no allegations of official misconduct have been made.