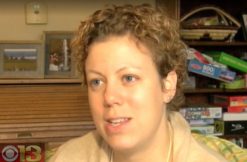 When employees get fired for social media activity, it’s usually for writing certain kinds of material. Stuff like racial slurs, homophobic rants, and joking about shooting people. Did we mention the racial slurs? Then there’s Kate Nash, a former social media coordinator for Frederick County Public Schools in Maryland. She got fired after correcting a student’s spelling.

This is how it happened, according to a WJZ report. Weather forecasts for Jan. 5 were looking pretty bad, so one student just wanted the day off. The kid wrote to FCPS’ twitter account:

Nash told the outlet that’s when she replied with this now-deleted message using the district’s account:

but then how would you learn how to spell “tomorrow”? 🙂

Nash told the outlet she didn’t mean anything disrespectful by it. She was just trying to be funny, and it was actually part of a sort-of rebranding attempt on behalf of the school.

But she said this tweet resulted in a four-minute meeting with her supervisors. That ended with her losing her job on Friday, she said, and provided the outlet with a letter from the school district.

Dear Katie, this letter confirms our discussion today that your probation period as a Web Experience Coordinator for Frederick County Public Schools will not be extended. You will be terminated from your assignment effective January 13, 2017.

Michael Doerrer, the FCSD communications director, reportedly went as far as to apologize to the student for the tweet.

When WHAG reached him for comment, he declined to comment except to confirm that Nash no longer works with them. He said he couldn’t say more since this is a personnel matter.