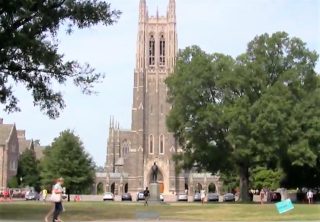 Documents show two prestigious divinity schools have taken steps to balance what they feel are sexist institutions in the church’s history. In order to counteract gender bias, the schools at Duke and Vanderbilt are pushing for gender-neutral terms and pronouns to be used, especially in reference to the divine.

Vanderbilt Divinity School’s current course catalog comments on their institutional efforts. In a section on sexism, the school says that:

The school is committed to opposing the sexism that has characterized much of the history of the church and Western culture and is still present in our society. This commitment entails the conviction that women have a larger place in the ministry and in teaching than they now enjoy. It requires … concerted effort to eliminate all forms of discrimination in attitudes, practices, and language. The school regards the use of inclusive language as an expression of its opposition to gender-based prejudice.

The school promotes the use of such language “especially in relation to the Divine. ”  Vanderbilt says that male privilege in “a patriarchal society” stems from sexism, and they hope to put a stop to it. The school offers a number of courses related to ethics and feminism.

Not much details is given regarding how the school will use language to even what they consider to be a gender-biased playing field. The school’s associate dean for academic affairs, Melissa Snarr, told Heat Street that how to go about this is up to each professor, and that the guidelines are “suggestive rather than mandatory.”

Duke, on the other hand, has been much more thorough with their instructions on using more gender-neutral language. Believing that the language “can be harmful and exclusionary,” the school’s guidelines give a plethora of examples of gender-specific terms that can be replaced with neutral ones, ranging from using “clergy” or “clergyperson” instead of “clergyman,” to “mail carrier” instead of “mailman.” When it comes to pronouns, the school suggests eliminating pronouns or using gender-neutral ones such as “they” or “we,” or at the very least, alternating between male and female when not referring to specific people.

When referring to God, Duke says that people shouldn’t exclusively use male or female pronouns or metaphors. As a replacement for pronouns, the school suggests using “God” and “Godself,” as in, “God knew Godself to be great.”

Duke admits that this sort of language might feel “clumsy,” but says that’s mainly because they’re still transitioning their use of terminology. ” The guidelines say, “Imagination, patience, and diligence are required in order to use language that expands and enriches our understanding of God.”