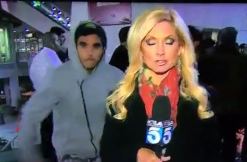 Some guy broke up a live broadcast of an LA reporter talking about David Bowie late Monday.

Mary Beth McDade of KTLA just wanted to be at the Hollywood Walk of Fame, and talk about how awesome Bowie was. But then this random guy wanted to run up behind her, touch her, and yell even though cameras were rolling:

What went through this mastermind’s head? Maybe, Oh, man, there’s a camera. Time to do something really dumb.

The guy didn’t cause any injuries, and he yelled something sexual (reports didn’t explain what), and bolted. McDade was fine.

Los Angeles Police Department spokesman Officer Mike Lopez told the LA Times that this weirdness isn’t being considered an attack. But they do consider it disturbing the peace, and will keep looking for him. He better prepare to run again.