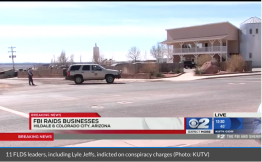 The Utah-Arizona based sect allegedly diverted funds from Utah’s nutrition assistance program for inappropriate use by its leaders—including forcing church members to put food in a communal storehouse for all members.

Among those charged are Lyle Jeffs, who runs the day-to-day operations in the polygamous community, and Seth Jeffs, who leads a branch of the group in South Dakota. Lyle and Seth Jeffs are the biological brothers of the  Jeffs and are co-leaders of the Fundamentalist Church of Jesus Christ and the Latter-Day Saints (FLDS).

The infamous group has functioned under significant scrutiny, especially in the wake of Warren Jeffs’ imprisonment. However, U.S. Attorney John Huber made it clear, “This indictment is not about religion. This indictment is about fraud.”

“The bust goes well beyond fraud — putting in doubt who will lead the group and how members will respond to a decisive message from government officials they have historically despised,” Amos Guiora, a University of Utah law professor told the Associated Press.

Federal, state and local police served search warrants and made arrests after raids were conducted targeting the church leaders. Officers went into five businesses operated by FLDS, including a dairy store and a produce store.

Warren Jeffs, the former President of the Fundamentalist Church of Jesus Christ and the Latter-Day Saints, is currently serving a life sentence in Texas as a result of his 2011 conviction of two felony counts of child sexual assault—specifically of his 12-year-old and 15-year-old child brides.

Lyle Jeffs is due to appear in a federal courtroom in Salt Lake City on Wednesday.