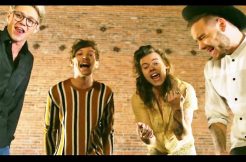 Have you read the Twitter page for police in Wyoming, Minnesota? Who manages that? Because those people just disrespected your little sister’s favorite band.

Do NOT drive drunk. I will find you. I will arrest you. I will make you listen to One Direction cover bands on the way to jail.

It’s unclear if this post directly references “One and Only Direction: The Ultimate Tribute Experience” or some other cover band.

Cops from Oxford, Mississippi called them out for being too brutal, but the WPD shot back with a disturbing allegation.

I heard you play Nickelback. https://t.co/ouhl2eBOQi

And what about One Direction? Who shall defend the honor of Liam, Niall, Louis, and dear Harry?

@wyomingpd @Ranger_Up but what if we like One Direction? Not saying I do but I figure it’s a fair question.

Nobody likes One Direction. https://t.co/r7wrRt3bAX

Get dunked on, Pasco Sheriff’s Office.

Oh come on, @wyomingpd makes a joke about One Direction and gets 3,000 RTs. We make a Nickelback joke and nothing. Rude, Twitter, rude.