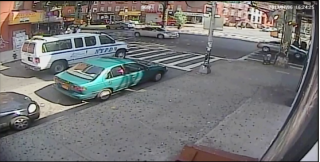 The New York Police Department (NYPD) is claiming that a Brooklyn pedestrian who was struck with a van by an NYPD officer in Williamsburg, Brooklyn in July 2013, “assumed risk” when he walked across a crosswalk.

The NYPD and the New York City Law Department—which represents the City and the City’s many agencies in all affirmative and defensive civil litigation cases—are embattled in a lawsuit with the family of Felix Coss, a veteran Spanish teacher who was struck by an on-duty police officer. The NYPD believes that Coss behaved recklessly by crossing the street, despite video footage showing the 61-year-old in a crosswalk, with a walking signal.

Officer Paula Medrano of the 90th Precinct struck Coss with a marked police van. The video shows Medrano accelerate as she turns left into the intersection, striking Coss and knocking him several feet forward into the asphalt concrete. Medrano appears to race out of the vehicle and to the man’s aid; unfortunately, the teacher suffered severe head injuries and died that night at Bellevue Hospital.

The incident report released by the NYPD states that Medrano turned with a green light; however, the report omits the fact that Coss entered the intersection with the walk signal and had the pedestrian right of way.

According to the Daily News, Medrano’s phone records were subpoenaed after a witness statement claimed the officer was on her cell phone at the time of the incident. Yet, the New York Post reported that Medrano probably wouldn’t charged by NYPD.

The lawsuit brought by the Coss family alleges that Medrano was driving recklessly, using her cell phone and failed to yield to a pedestrian crossing the street.

The Law Department’s court filing attempts to shift blame to Coss and states,

Plantiff(s) voluntarily performed and engaged in the alleged activity and assumed the risk of the injuries and/or damages claimed. Plaintiff(s) failed to use all required, proper, appropriate and reasonable safety devices and/or equipment and failed to take all proper, appropriate and reasonable steps to assure his/her/their safety … Plaintiff(s)’ implied assumption of risk caused or contributed, in whole or in part to his/her/their injuries.

The Coss family’s attorney, Andrew Levine, says the NYPD and the City have resisted providing materials relevant to the case. “They have things in here — that he should have known, that he was engaging in a dangerous activity,” said Levine. “He’s a pedestrian walking across the street with the walk signal.”

The Coss family and the City are scheduled to meet in court in April.

WARNING: The video may be disturbing to some viewers.