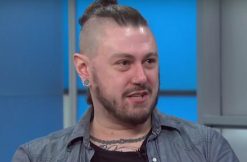 Kevin Allred, a lecturer at Rutgers, is livid after police made him take a psychiatric evaluation after sending out an incendiary tweet. What’d he write? The post, which he now says was deleted by Twitter, read “Will the 2nd amendment be as cool when i buy a gun and start shooting at random white people or no…?”

Campus cops called the NYPD to make a wellness check on Allred, who lives in Brooklyn. This is what he says then happened (foul language warning):

NYPD just came to my house bc Rutgers Police told them i’m a threat based on political statements i’ve made on campus and on twitter.

they’ve forced me to now undergo a psychiatric evaluation at the hospital. they brought me by ambulance tho i’m not under arrest technically

and this is for exercising my fucking first amendment rights. i’m being labeled a threat and put in a psych hospital

they’re taking my phone now. but i’ll try and tweet again as soon as i can. if not, i’m at bellevue being held!!!!

ok. they let me leave. this is a shitshow and is proof positive that Trump’s crackdown on free speech has absolutely begun.

i said: would conservatives care as much abt the 2nd amendment if guns killed more white people? a question meant to expose double standard

The NYPD confirmed to Gothamist that “We were informed by Rutgers PD that he made threats to kill white people and he was subsequently taken to Bellevue Hospital for evaluation.” A Rutgers spokesman told NJ.com that the campus police were responding to a student complaint “and took all appropriate action.”

“The tweet however was tied closely to the Second Amendment and seemed to me to be rhetorical,” he wrote in a Friday blog post. “The question is whether the university could have resolved this problem by speaking with Allred or whether tried to do so without success.”

But Allred claims the Rutgers PD never tried to contact him before the NYPD took him for the psych eval. In fact, he says he passed the examination, and he was never arrested, nor are there charges pressed against him. Here’s one tweet from Thursday, stating there is a double standard regarding the First Amendment.

joke abt shooting at white ppl on twitter: UNACCEPTABLE, ILLEGAL, LOCK HIM UP pic.twitter.com/cPZemJ42fL

There are in fact limits to speech, though the burden is on the government to prove it’s actually empowered to legislate. His tweet is protected speech unless investigators prove he was actually going to shoot white people, or cause the shooting of white people. The 1969 Supreme Court case Brandenburg v. Ohio held that:

Freedoms of speech and press do not permit a State to forbid advocacy of the use of force or of law violation except where such advocacy is directed to inciting or producing imminent lawless action and is likely to incite or produce such action.

This case struck down an Ohio law used to convict a KKK member who said some incendiary things. Here’s a relevant excerpt of his words so you can compare it to Allred’s:

We’re not a revengent organization, but if our President, our Congress, our Supreme Court, continues to suppress the white, Caucasian race, it’s possible that there might have to be some revengeance taken.

Update – November 18 – 4:31 p.m.: We followed up with Rutgers for supplementary information, and they sent us this statement.

We will not comment on the specifics of an individual personnel matter. As a general rule, however, when the University is presented with allegations of threats to public safety, we take those allegations very seriously and have an obligation to investigate. Mr. Allred has been placed on administrative leave and will therefore not be teaching.