Parents Turn to Judge to Get Unemployed, 30-Year-Old Son Out of the House 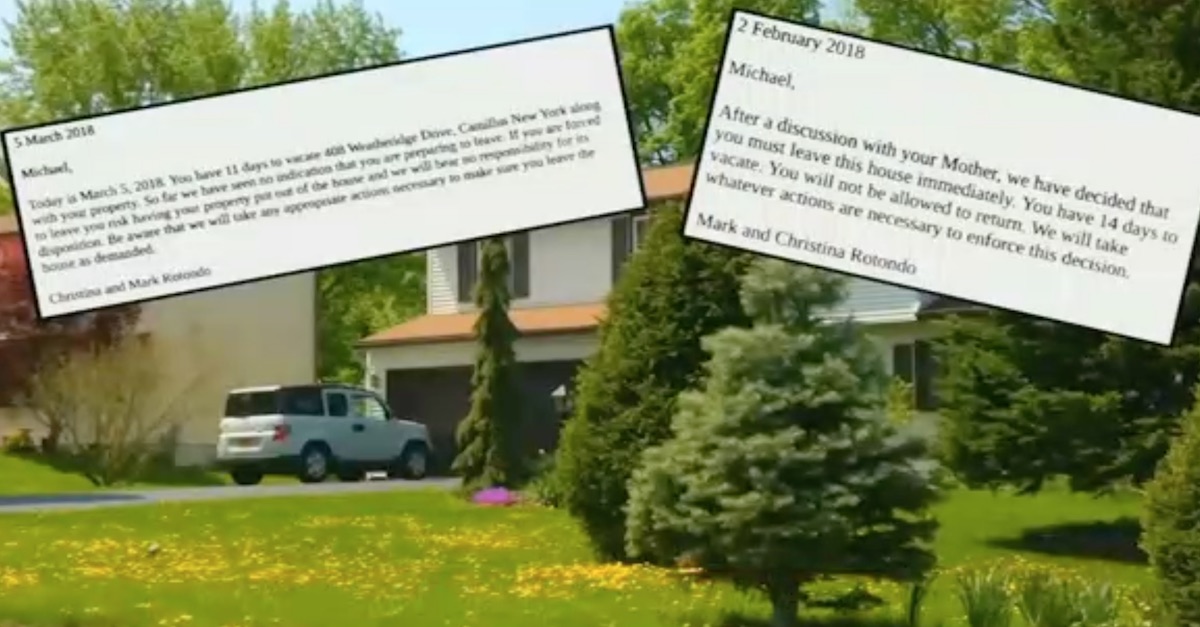 Every family has its own challenges. The challenge for the New York-based Rotondo family? Getting their 30-year-old son to move out of the family home. They’ve gotten their wish.

A judge has ordered Michael Rotondo to leave his parents’ home.

Rotondo replied that he found the case in minutes on the internet.

Camillus family in Onondaga County Supreme Court today after trying to evict 30yo son Michael Rotondo. Judge has ordered him to vacate the home, Rotondo says he's not sure where he will go. More at noon on @NewsChannel9 pic.twitter.com/pnevEQvwpj

Judge Greenwood asked the attorney for the parents, Anthony Adorante, to put together an eviction order the judge would sign.

Christina and Mark Rotondo of Camillus, N.Y., bombarded their son Michael with letters week after week demanding that he leave the home. Michael, who is unemployed and 30, has even been offered more than $1,000 for help with moving.

30-year-old Michael Rotondo addresses the courtroom. His mother is seeking to evict him from her Camillus home. @SPECNewsCNY pic.twitter.com/RoCZr5RzLQ

Images of at least 5 letters they’ve sent from the beginning of February to the end of March show how seemingly desperate the parents are for their son to grow up.

The letter said things like, “After a discussion with your Mother, we have decided that you must leave this house immediately,” and, “Michael Joseph Rotondo, You are hereby evicted from 408 Weatheridge Drive, Camillus, New York effective immediately.”

But the Rotondos didn’t stop at sending letters. They tried in April to get the town court to evict their son to no avail. On May 7, they filed a petition in state court to order Michael’s eviction.

That petition resulted in Tuesday’s ruling, which Rotondo may appeal.

The court appearance lasted 30 minutes and was described as “surreal.” The best detail of all is that Rotondo actively sought out news cameras as he left the courtroom to tell his story before he went back home to his parents’ house.