One Female Guard Arrested for Giving Marijuana to Inmate, the Other for Sexual Assault | Law News
$promoSlice() doesn't exist!

One Female Guard Arrested for Giving Marijuana to Inmate, the Other for Sexual Assault 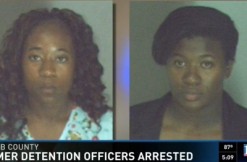 In DeKalb County, Georgia, two women detention officers are in trouble for having having the wrong kind of relationships with inmates. Shanik Bishop, 26, and Nardia Reynolds, 30, were arrested on June 8, according to an 11 Alive report.

Bishop allegedly gave marijuana to one inmate, the Dekalb County Sheriff’s Office said. Now she’s charged with felony violation of oath by a public officer, and felony crossing guard lines with a weapon, liquor, or drugs.

Then there’s Reynolds, charged with sexual assault against a person in custody, and like Bishop, felony violation of oath by a public officer. Both lost their jail jobs with Dekalb County, and are out on bond.