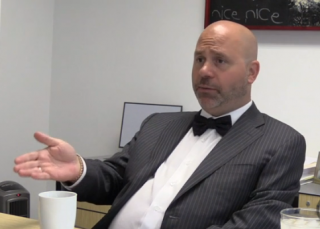 A Cleveland defense attorney with one arm found himself fighting against a suspect for a change — literally. Ian Friedman was in his office earlier this year, when his receptionist heard a commotion and reportedly found Edward R. Jackson at her desk, going through her purse, Cleveland.com reported. For the past two weeks, she had noticed items going missing from the front desk, including cash and a smart phone.

When office receptionist Danielle Lucas notified Friedman, the attorney chased Jackson out of the office. “As I got down the hall I saw some guy with his back to me, and it appeared to me he was attacking Danielle,” he told Cleveland.com.

Friedman, who lost an arm in a 2011 motorcycle accident, grabbed Jackson by his jacket when they reached the lobby. Dressed in a three-piece suit and bow tie, the attorney then wrestled Jackson to the ground. Jackson eventually got back up and the two tussled into a stairwell, where Jackson escaped his own jacket and tumbled down the steps before running away.

Lucky for Friedman, he still had the other man’s jacket, which also contained his wallet, driver’s license, parole documents, and court papers bearing the name Edward R. Jackson.

Jackson, whose burglary trial began on Monday, was also indicted for stealing from a doctor’s office in December. He has a criminal record going back to 1979.