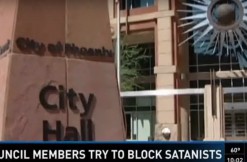 The City Council of Phoenix, Arizona banned prayer at meetings rather than let Satanists give the invocation. Instead, they decided Wednesday they’re now doing a moment of silence.

See, a rep for the Satanic Temple was scheduled to do the invocation at the Feb. 17 city council meeting. Yes,  that wasn’t a typo. “Satanic” as in the guy who reportedly runs Hell, that place of fire, brimstone, and gnashing of teeth. Rather than have them pray in public, it was proposed to squash invocation altogether.

Dear, Lord, this set off some locals, the most vocal of whom wanted to keep invocation. One woman speaking at Wednesday’s city council meeting called the Temple a “hate group” and a bunch of misogynists. Another woman said the United States “would have never risen without God.” Testify!

It was a close vote, with the Council split 5-4. You can check out video excerpts from that Wednesday meeting here:

But where are the Satanists? Not behind the behind the microphones. Lucien Greaves, spokesperson for the Satanic Temple, explained in a guest post for Patheos, a multi-faith blogging site: “No member of The Satanic Temple spoke, and it was unclear whether or not the baffled Council members who opposed our right to give an invocation would agree we could approach the Council to speak on our own behalf.”

Greaves said the Temple would have sued had the Council outright blocked their Feb. 17 invocation. They’d have claimed discrimination, he wrote.

Phoenix City Councilman Sal DiCiccio thinks the Satanists want to ban prayer. Their goal “has always been to ban all prayer. If the Mayer and Council were to give into the Satanists; then they would be granting them their wish,” he said, according the Arizona Press Gazette. Greaves thinks that’s silly, and was pretty confident they’d have won the hypothetical lawsuit.

In 2014, the Supreme Court upheld legislative prayer in council meetings. That was actually another 5-4 vote, with the dissenting judges were worried about the potential for abuse. They were A-OK with public prayer, but it had to be fair. Justice Elena Kagan, for one, had concerns about religious equality, “the breathtakingly generous constitutional idea that our public institutions belong no less to the Buddhist or Hindu than to the Methodist or Episcopalian.”

Justice Samuel Alito thought the problems were “niggling,” he wrote in a concurring opinion. He thought that problem could be fixed with greater religious diversity and nonsectarian prayers in invocations.

Safe to say, neither were thinking about Satanists.

Anyway, we can only guess how a “Satanists v. Phoenix” suit would have gone, had the city just prohibited a satanic invocation outright. It’s possible the plaintiffs would have hitched their case to the First Amendment. There’s also the 14th Amendment, which promises equal protection under the laws, and applies to states and local governments.

The Satanic Temple is kind of infamous even among other Satanists. In 2013, they held a “pink mass” over the grave of the mom of Fred Phelps, reportedly trying to turn her gay in the afterlife. (Yes, that’s the Phelps who founded the Westboro Baptist Church.) But Hell, their leaders don’t even believe in the devil, citing the character as just an inspiration. In an actual, honest-to-God interview with The New York Times, Greaves (aka Douglas Mesner) said, it was more about “the solidarity of outsiders, those judged and excluded by the mainstream.” And their leaders have answered criticism that they’re not even a serious religious group, just a bunch of satirists and pranksters.