Now Katt Williams Was Arrested for Throwing a Salt Shaker 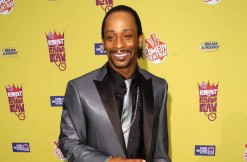 Comedian and arrest-magnet Katt Williams was cuffed Wednesday in Atlanta after allegedly throwing a salt shaker.

The 42-year-old and his posse entered Spondivits, a seafood restaurant. But then, cops told TMZ, he argued with the manager over problems with their seating arrangement. Things escalated, and Williams allegedly threw a salt shaker at the manager’s face.

The alleged victim had a bloody lip, police told WSB-TV. Williams was reportedly arrested later at a nearby Waffle House.

Despite being a respected comedian, Williams has an ongoing criminal history stretching back for years. He was arrested in March for getting into a fight with a 17-year-old boy. At a standup show, he said he was just teaching the kid a lesson.