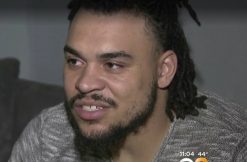 “KKK.” “Go Back to Africa.” These and other vulgar messages were written on the walls of New York Giants fullback Nikita Whitlock’s home in Moonachie, New Jersey.

“It’s about to be 2017,” he told CBS New York in a Wednesday report. “Oppression, violence, racism, hatred, violence, there’s no need for that.”

He said the vandals probably broke in through a small window. They took video game systems, and jewelry, but also left messages like “Trump” and “N—-r Lover.” (Whitlock and his wife Ashley are both black, so that so latter message doesn’t make sense even from a racist perspective.)

This is the second break-in they’ve seen. The first one, which happened over the Thanksgiving holiday, remains unsolved and cops continue to investigate that incident too.

We’ve reached out to the Moonachie Police Department for more information. They confirmed that jewelry and “home electronics” were stolen, and that graffiti, which was “racist in nature,” was written on the walls. The investigation is ongoing.

“The Moonachie Police Department would like to stress to the public that this appears to be an isolated incident and as always is urging residents to make sure their doors and windows are locked and that if they see anything suspicious they should call police immediately,” they said.